What better way to Celebrate 4 close friends birthdays than to Eat! Rather than spend money on a present, spend it on lots of yummy food! LZ had heard a couple of reviews from friends, and wanting to get over the bridge for the night we decided on After The Tears in Elsternwick 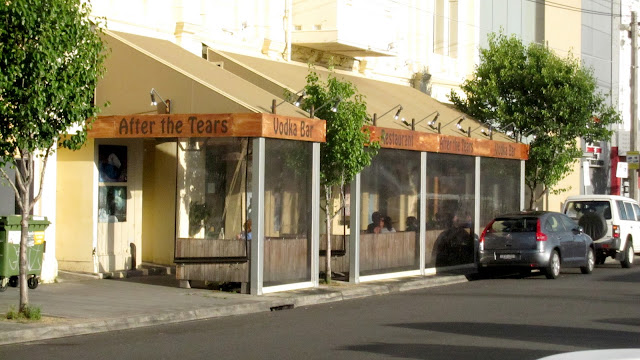 After the tears is a restuarant and a Vodka Bar, they proudly mention there list of over 100 Vodkas. Wasn't I glad I did stick my hand up for designated driver he he he. 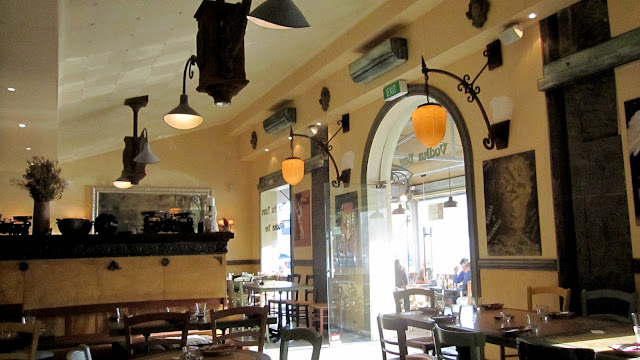 Inside the restaurant it had a lovely warm feel, and was decorated nicely. We sat down and were given our menus straight away, I quickly thumbed throught the Vodka pages ( but i'll be back though) to find those illustrious little Pierogis.
There were 3 varieties of Pieorgi;
-> Beef & Chicken, served with bacon and raspberry vinegar porcini
-> Mushroom & Sauerkraut, served with brown butter, sage & cranberry reduction
-> Potato & Cheese, served with sour cream and caramelised onion 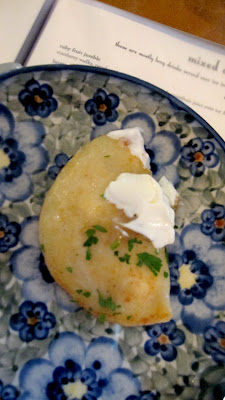 We ordered a main serve of the Potato & Cheese Pierogis to share (6 for $20.50 )
They were good, really good. Topped off with the creamy sour cream and sweetness of the caramalised onions. Good flavour, soft and not stodgey like I was expecting. 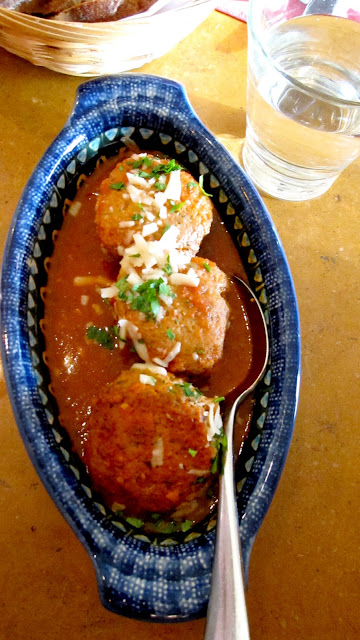 Our other Entree was the home made Chicken Meatballs (3 for $13)
They consisted of chicken mince and diced vegetables in a hearty tomato sauce laced with paprika and herbs, it was served with rye bread. This dish was great but a lot harder to share 3 meatballs between 4 people but we did 'politely' as we could. I did find the sauce quite salty, lucky i'm quite the salt fiend, but people not big on salt may not enjoy it.
We all agreed we could order another plate of the Pierogis and Meatballs and be really happy.
But we would push on with the mains, as trying new things is what it is all about. 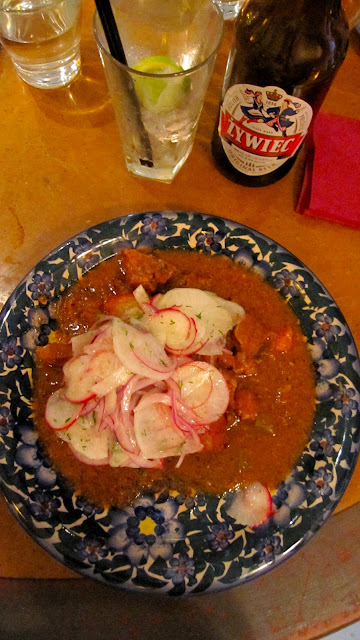 I order the Veal Goulash $22. It came incased in a deliciously crispy potato pancake and topped with a 'zingy' white radish and red onion salad. I enjoyed this. The meat was beautifully tender and the potato pancake was great to sop up the rich sauce ( unfortunately pancake was hidden under the radish salad) The salad was a refreshing change to the meal and cut through the rich paprika sauce.
As per usual I had food envy of my partner Jj's meal. He ordered the Polish Sauages 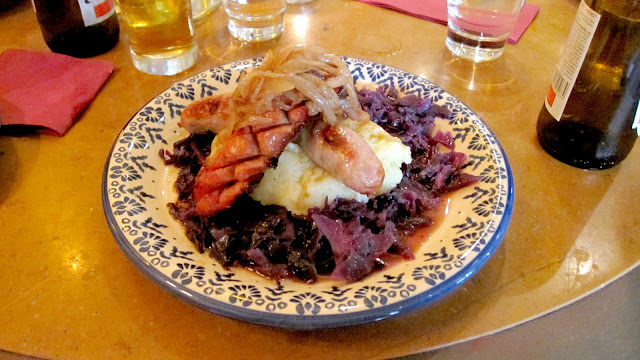 The Polish Sausages $22. A char grilled Kransky and a white Polish Sausage on a bed of roasted garlic and olive oil mash potato & braised red cabbage, caramelised onions and Jus.
Jj enjoyed this and wasn't to keen on my fork flying in on his plate space. The Mash was great, but I am a sucker for creamy mash ( I promise i did leave him some) this was definetly a great comfort food dish, but i guess I could really say that about the whole menu 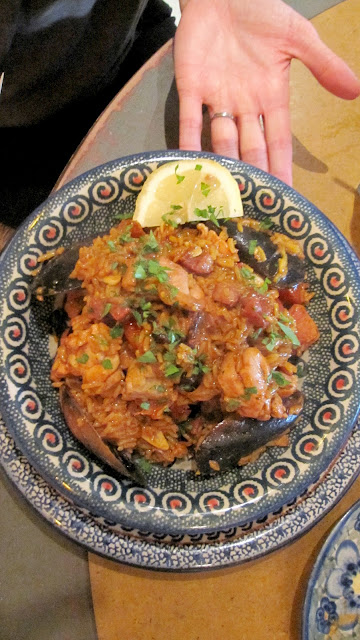 Paella con Pollo $24
Now is it just me or does anyone else think having a Paella on a Polish menu Bizarro...? Anywho LZ was really after the seafood. This was okay, it did have a generous amount of seafood and plump chicken pieces although i think the large semi sun-dried tomatoes were a bit of overkill.
I missed out on getting a photo of Mr S's meal, he ordered the Lamb Ragout off the snack menu and nearly polished it off by the time i was ready to take a snap. Mr S said it was great his only complaint was he wished it came in a main size which the waiter said they could not do (hmmmmmmm)
An honourable mention goes out to "Bohemian Lover" a shot of 1/2 Absinth and 1/2 wormwood liqueur vodka. It was gorgeous and warmed you all the way down with every sip
I'll definetly go back to After the Tears and will make a point of trying their brother restaurant in Chapel Street, Borsch, Vodka and Tears
After the Tears

Email ThisBlogThis!Share to TwitterShare to FacebookShare to Pinterest
Labels: After the Tears, Elsternwick, Polish

Double Rainbow Cake - All the Way

It was my good friend Tony's Birthday, and I decided to make his birthday cake. I had been searching for a idea on Tastespotting.com when a came across the "perfect cake"
For weeks Tony had been driving me nuts with the that bloody "Double Rainbow Song" on You Tube 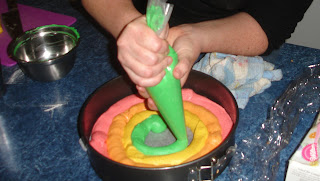 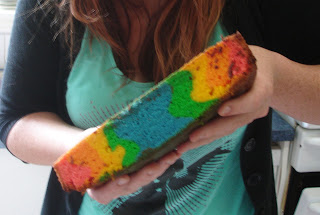 Unfortunately I had run out of Red colouring, hence why my red part of the rainbow is clearly pink. 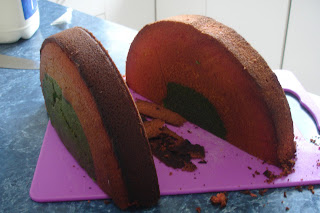 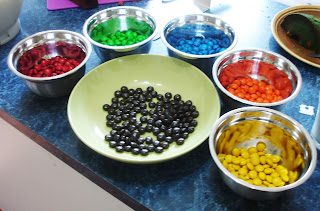 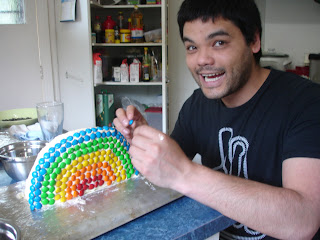 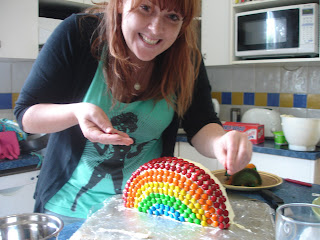 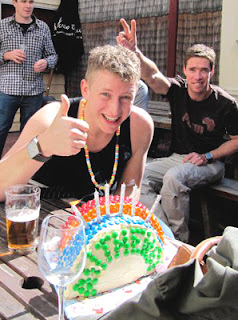 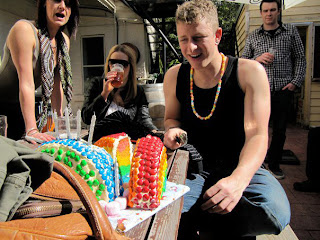 Happy Birthday Tony. Yes it was "So Bright, So Vivid."
Posted by Courtney at 7:32 PM 1 comment:

Email ThisBlogThis!Share to TwitterShare to FacebookShare to Pinterest
Labels: Cake

I dont know how this blog will turn out. I am so very far from being a literary genius ( I dont write real good..!!) I don't take amazing photos either ( Wow Courts, way to sell yourself Ha!) But I do love Food & Cooking. I spend most of my nights in front of the TV before bed, with Laptop on..well....my lap, reading and researching food, recipes, restaurants and food blogs.

Firstly this Blog is for me, secondly for my gorgeous partner Jake ( the best kitchen hand/ apprentice & market trolley pusher a girl could ask for) and my amazing family and friends.

I'm new at this so if can get past my spelling mistakes & typos, then hopefully it can be a place of cooking and eating inspiration. Welcome to La Cookaracha where we cook/create/sing and dance in the kitchen.
Posted by Courtney at 8:24 PM 2 comments: